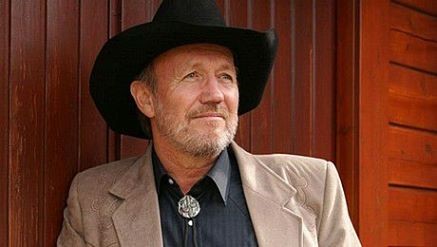 Hermann Lammers Meyer was born Dec o7, 1952 in Aschendorf Germany, since 1973 he is busy singing and playing country music, the classic style, all over Europe. A few years ago he started his own radio show, he named Town & Country on Germany`s EMS VECHTE WELLE, that covers a big part of northwest germany and parts of northeast holland. Due to the success he had doin that, he was invited to do Radio Specials for Germany`s largest National Radio Station the WDR, where he hosted the SUPER LONG COUNTRY NIGHT a few times, which lasted 6 hours, nonstop, with quite a few international guests.

This is what the great Johnny Bush had so say about Hermann Lammers Meyer, when he wrote the liner notesor Hermann`s WALTZ OF THE WIND CD.
I first met Hermann Lammers Meyer about ten years ago. I was playing with my band, The Bandoleros,at a place called “The Market” in San Antonio.Tx. My steel guitar player at that time, Bob Kelly, introduced me to this young man from Germany (Hermann), who handed me his new “45” record, and on one side he had recorded one of my songs. I was flattered. He told me he was a big fan of mine and had come all the way to San Antonio to meet me, I played the record when I returned home, and I was impressed for two reasons, one of cource being that he had chosen my song to record: secondly,because he had a style that was different.

He did not try to sound like the new country acts of today (and the only reason they have a rocord deal is because they sound like somebody else). It was refreshing to hear a new talent with a singing style of his own. A few years later Hermann came to Spicewood,Texas to record an album at Willie Nelson`s Studio. At Hermann`s request, the steel guitar great Jimmy Day asked me to be part of this album. I was honored, but a little relucant, as I hadn`t played drums on a record since I was a Cherokee Cowboy with Ray Price thirty years ago. Hermann also recorded a couple more of my songs on that session, and we became friends. Hermann is an extremely likeable young man with a great sence of humor, who posesses that rare ability to hear a hit song. In 1997, Hermann invited me to come to Germany and play ten dates with hime and his band. Hermann and his wife Anke are most gracious hosts, and my wife and I had a wonderful time, seeing a great deal of Germany,playing wonderfull music and meeting a wide variety of friends,family, fans, and media. Hermann and I had a million laughs. Hermann is a fine singer and songwriter, a great steel guitar player, and radio dj, who lives and breathes traditional country music.

Thanks to artists like Hermann, our music will live on, and I predict that he will be known internationally. In Germany and Europe, of cource, he already is a star !