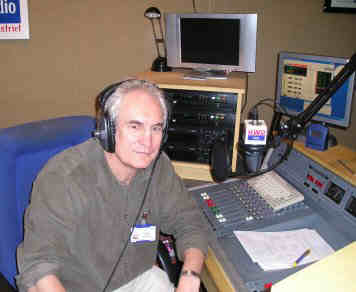 I’m Graham Lees and was born in the North of England. Country Music first drew my interest in the early 60s when the two presenters of a children’s TV show…Wally Whyton and guitarist Bert Weedon included a country song in the show. At the time I didn’t know this was country music, but I liked it!!! I then started to find out more and was drawn to the music of Johnny Cash. In the early 70’s I was introduced to bluegrass while living in Australia.

Later my interest turned to the jazz based western swing music of Bob Wills after hearing a local band play New San Antonio Rose. I had the privilege of meeting Bob’s daughter Rosetta in 2001. As a kid I was always fascinated by the cowboy and in particular the silver screen cowboys including Hopalong Cassidy, who I would see at the Saturday matinee in the local cinema. As Nashville changed and corrupted country music in the 1990’s I renewed my interest in cowboy music.

My first trip to the USA was in 2000 when I started obtaining more music of modern day western artists. I became a member of the British Country Music Association (BCMA) in 1993 when I started working as a country music journalist writing for North Country Music magazine, which folded in late 2003. Since that first beginning I have contributed articles and CD reviews on country, bluegrass, blues and folk music for several magazines, regularly. On my website you have the opportunity to view a small portion of the interviews, article and CD reviews I have done over the years.

As a music journalist I have been fortunate to interview many artistes. Just a few of the country artists include Ray Price, Reba, Suzy Bogguss, Ricky Skaggs, and Brad Paisley. On the western side of the music I’ve interviewed Leon Rausch, Tommy Allsup, Belinda Gail and Curly Musgrave, R.W. Hampton, Michael Martin Murphy, Don Edwards, Red Steagall and many, many more. My greatest delight was an interview with Townes Van Zandt just a couple of years before he died, who proudly told me about his part as an extra in the movie The Songwriter, staring Kris Kristofferson & Willie Nelson. During a lull in the filming of a theatre scene, Kristofferson walked on to the stage, pointed Townes out and announced “this man is Townes Van Zandt…the songwriter’s songwriter!” Townes told me that after that moment he and his wife were both treated as though they were also stars of the movie. I started working with local radio a few years ago and now have a weekly radio show on HWD Radio in Yorkshire where I now live presenting a two-hour country music show ‘The Country Connection’. The first hour is a mix of traditional country, plus a little bluegrass. The second hour…’The Western Hour’ is all Western Swing and Cowboy music. ‘Western Hour’ and ‘Twang~Grass’ (all bluegrass show) can be heard streaming on Twang Town USA radio website . Both shows change each month. I have produced many specialist radio shows over the past four or five years. I produced a radio show profiling Buddy Holly in the summer of 2003. The success of this show has led to series of two-hour radio program profiles of Elvis Presley, Roy Orbison, Johnny Cash and Dolly Parton.

My most recent project is a series of occasional shows ‘Guess Who’s In Town’ that includes an interview and music of a western artist. The first featured R.W Hampton which was broadcast in January 2007 and streamed on The Western Hour at the Twang Town USA website during February. In 2001 I was thrilled to take my wife to Texas for The Legends of Western Swing Festival (Wichita Falls) where we were made extremely welcome by organiser Mrs. Gloria Myers and the many fans attending the event. The musicianship of the bands playing during the event was top-class and I returned again in 2005. On my trips to various western events over the years I’ve found the friendliness and generosity of the many western fans to be the finest anywhere. In 2004 I was invited to attend the Academy Of Western Artists (AWA) convention and prestigious Will Rogers Awards in Fort Worth, Texas. Part of the entertainment at the AWA convention was a radio format show in which DJs and radio presenters gave a 30 minute show introducing and interviewing artists who were attending over the weekend. Invited to take part, I was pleased to have artists Jean Prescott, Fletcher Jowers and the five-piece group The Texas Trailhands as my guests. In November 2006 I was privileged to be invited to attend the Western Music Association annual event and Awards at Albuquerque where I renewed acquaintances with many of the artists that I had met at the AWA, along with many more who were attending the WMA event. I became a member of the WMA have have attended their showcase and award event several times over the past years. During my numerous trips to the USA and in particular Texas, I have made many good friends from the western music scene including Betty and Doug Carter from Albuquerque, Texan Jim Anderson (Palo Duro) and his family, Bill Adams (western swing band) and O.J. Sykes who I met through his Western Music Time show. It is my greatest pleasure to promote and draw fans here in the UK to western music through my radio shows by playing the many CDs that are regularly sent to me by western artists in the US. Thanks a bunch!!! I hope that you enjoy looking through my site!!!

Listen the 2nd Wednesday in the month at 2 pm, 10 pm and Thursday 6 am