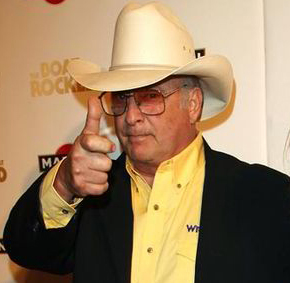 Emperor Rosko is a well known radio presenter. Born Michael Joseph Pasternak, he is the son of Hollywood film producer Joe Pasternak. He was influenced in his career choice by KYA Radio Los Angeles DJs Emperor Hudson and Wolfman Jack. Rosko’s opportunity to broadcast came whilst in the US Navy where he presented a show on an aircraft carrier. He then went to Europe and hosted sponsored programmes in France and Belgium.

He joined Radio Caroline, a pirate radio station broadcasting from a ship off the coast of England, in 1964. There, his pacey American style soon made Rosko one of the station’s best loved DJs. He then was heard on French language stations Radio Monte Carlo and Radio Luxembourg.

It is Rosko who is heard introducing soul singer Otis Redding, as well as encouraging the crowd to chant and spell his name on Redding’s album Live in Europe, recorded on March 17 and March 21, 1967.

He was a disc jockey with Radio 1 at its launch in September 1967.  (At the time he was living in France and sent recorded shows to the BBC for the Midday Spin programme). On his first Midday Spin show, Rosko introduced himself like “I am the Emperor, the geeter with the heater, your leader, your groovy host from the West coast, here to clear up your skin and mess up your mind. It’ll make you feel good all over.” He highlighted the new Motown, reggae, and rock music. John Dunn, BBC news presenter who followed Rosko’s show, must have had some difficulty understanding Rosko’s ‘jive talk’ when he announced “Now here is the news – in English!”

Rosko moved to the UK in 1968, so was then heard live on Radio 1.  Along with a fellow DJ he launched the first mobile discothèque, the Rosko International Roadshow.

From 1970 he presented the Friday Roundtable where new records were reviewed by a panel, and a Saturday lunchtime slot.  He stayed with Radio 1 until September 1976, when he left for America to join his father, who was suffering from Parkinson’s disease.

Over the years since returning to America he has continued to record shows for many many stations around the world (too many to list here, but a list of current stations can be requested).  Also, Rosko is still active in Los Angeles performing as a DJ at parties under his Rosko Party Productions label.

On 11 April 2009 he presented a three hour show within a BBC-sponsored commemorative broadcast from the lightship LV18 berthed at Harwich.

In December 2009 Rosko released the first of his ‘radio show’ series for the Boisdale restaurants, sponsored by Glenfarclas. The series kicked off with a Christmas holiday special, which can be heard playing at the restaurants over the festive period.

Rosko was the inspiration for the character “The Count” in the 2009 film The Boat That Rocked, known as Pirate Radio in the United States.

Rosko broadcasts a weekly programme called “The LA Connection” from his studios in California which is a mix of music from the 50s right up to today, also with fun Hollywood news and gossip plus top 10 movies etc.

He has been recording the “Coast to Coast Country” show each week, for a decade or more.  He started because no one seemed to be doing any shows quite like it at the time.  When asked what he loves about country, Rosko says “It is raw and funny, rocky and soulful”.  Coast to Coast is a mix of new and classic country.  Each week he plays a few of the best brand new songs, he covers the current top ten (and plays the top 2), discusses current country news and also country music history with the “on this week in country” feature.  Plus twice a year he does a countdown of the best new songs as voted for by the show’s listeners.

The LA connection and the Coast to Coast shows can both be heard around the world on stations from the UK and Europe to as far afield as Thailand.

In addition to these two main shows he also does an exclusive show for an oldies station and his own “Rosko Radio”, soul station, which can be heard via his website. 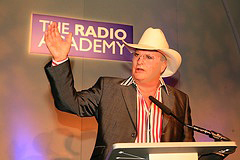