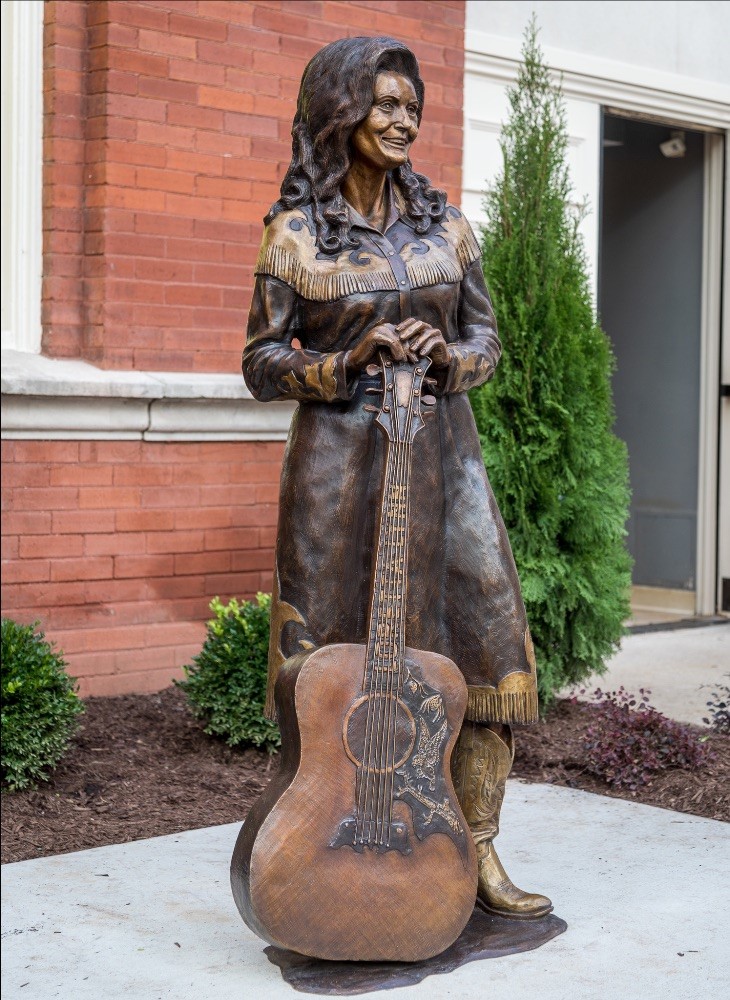 NASHVILLE, Tenn. – Ryman Auditorium unveiled the latest addition to its Icon Walk this morning with a statue honoring American music icon Loretta Lynn. The detailed bronze likeness was added to the permanent outdoor exhibition on the historic venue’s grounds ensuring the profound musical innovator and country music trailblazer will forever remain part of the Soul of Nashville.

A groundbreaking singer, songwriter and performer, Loretta Lynn is an archetype of American music, a singular artist whose music defined a genre and whose songs continue to inform new generations of musicians.

Loretta Lynn has long been established as the undisputed Queen of Country Music, with more than 50 years of recording and touring to her name. A self-taught guitarist and songwriter, Lynn was one of the most distinctive performers in Nashville in the 1960s and 1970s. She shook up Nashville by writing her own songs, many of which tackled boundary-pushing topics drawn from her own life experiences as a wife and mother. “Coal Miner’s Daughter,” “Fist City” and “Don’t Come Home A’ Drinkin’ (With Lovin’ on Your Mind)” are just three of her 16 country No. 1 singles.

By telling her own truths, and by writing about her experiences with a perspective and voice unlike any other Southern storyteller, Lynn has become an American hero and a country music standard-bearer. Her one-of-a-kind tale has been told in a feature film (with an Oscar-winning portrayal of Lynn by Sissy Spacek), two autobiographies and an American Masters public television documentary and even an exhibition at the Country Music Hall of Fame and Museum.

Lynn is also one of the most awarded musicians of all time. She has been inducted into more music Halls of Fame than any female recording artist, including The Country Music Hall of Fame and the Songwriters Hall of Fame, and was the first woman to be named the Country Music Association’s Entertainer of the Year in 1972. Lynn received Kennedy Center Honors in 2003 and a Presidential Medal of Freedom in 2013. In 2015, she was named recipient of Billboard’s inaugural Women in Music “Legend” Award. Lynn has won four GRAMMY Awards (including a GRAMMY Lifetime Achievement Award in 2010) and sold more than 45 million records worldwide.

The Ryman, affectionately known as the Mother Church of Country Music, was founded as a beacon of hope for the faithful in 1892. The venue has become an international symbol of cultural significance drawing millions of people to Nashville to find their own inspiration from the wooden pews under the famed stained-glass windowpanes.

The iconic brick building, which is on the national registry of historic places, rose to prominence first as Nashville’s largest venue for civic gatherings and later for attracting national touring shows including the biggest names in music, theater, and entertainment including Katharine Hepburn, Harry Houdini, Bob Hope, the Ziegfeld Follies, and countless others including President Theodore Roosevelt.

Today the Ryman is widely considered one of the finest performance venues in the world hosting performers from all genres of music. Today, the Ryman draws artists from all corners of the globe eager to experience the thrill of walking to the front of the stage to perform.

The historic venue became the home of the Grand Ole Opry in 1943, and the world of broadcast entertainment changed forever as the live radio and TV show brought the likes of Roy Acuff, Johnny Cash, Patsy Cline, Minnie Pearl, Marty Robbins, Hank Williams, Little Jimmy Dickens, and Bill Monroe to the stage and into living rooms around the country. The program’s 31-year tenure at the Ryman ignited the growth of country music.

Lynn was instrumental to that burgeoning popularity. Future statues added to the Icon Walk will continue to pay homage to those artists who helped to shape country music’s past, present, and future.

Tennessee residents are invited to experience the historic Ryman Auditorium daytime tour experience free of charge, Sunday, Oct. 25, as part of Ryman Community Day presented by PNC Bank and supporting partners Hiller and Farm Bureau Health Plans. Complimentary self-guided tours will be available from 9 a.m. until 4 p.m. with presentation of a valid Tennessee state ID at the Ryman box office. In addition, Ryman Auditorium will once again get into the Halloween spirit with The Haunted History Tour, a unique experience exploring the untold history behind unexplained sightings and occurrences reported at the Ryman throughout its 128-year history. On Oct. 30-31 from 7 p.m. – 11 p.m., tours will run every 15 minutes with groups limited to 10 people. Tickets are priced at $40 and available for purchase today at ryman.com.

Created as a way to honor those who have made significant contributions to the historic venue and Music City, Lynn’s statue joins likenesses of beloved legends Little Jimmy Dickens and Bill Monroe, two of the most profound musical innovators in country and bluegrass music. Both statues were unveiled in 2017 as part of the Ryman’s 125 anniversary celebration.

Lynn who was unable to attend the unveiling shared a statement, “I will never forget the morning Dolittle and I pulled in and parked in front of the Ryman Auditorium for the very first time. It was 1960 and I had a No. 14 Record on the charts called “I’m A Honky Tonk Girl.” My dream, like thousands of other singers, was just to sing on the Grand Ole Opry. Being a member of the Grand Ole Opry has been one of the greatest honors of my life. For many years I’ve stood on the stage of the Ryman and there’s no place like it. Now they’re unveiling this statue in my honor. It’s like I’m going to get to be there for many more years to come. It means so much to have the statue and to be a part of all of these wonderful artists. One day soon I’m gonna get to come up there and see it for myself. But for today I want to say thank you and I love each and every one of you for thinking of me.”

The Ryman team collaborated once again with artist Ben Watts, the talent behind the Dickens and Monroe statues for the tribute to Lynn which took a year to create.

“I don’t think it’s possible to tell the history of the Opry or Ryman without Loretta,” Colin Reed, Chairman & CEO of Ryman Hospitality Properties, shared with the small socially distanced group gathered to mark the unveiling as well as those watching live on the Ryman’s Facebook page. “She is a trailblazer who has remained one of the most beloved entertainers to ever set foot on that stage.”

Visitors can find the “Coal Miner’s Daughter” standing at the northwest corner of the building near the venue’s driveway on Fifth Avenue next to the likeness of Bill Monroe, the Father of Bluegrass Music. Country music’s Little Jimmy Dickens stands atop the Ryman’s main steps facing Fourth Avenue, greeting each and every ticket holder and tour-taker as they arrive. Monroe’s likeness is flanked by a Tennessee Historical Commission marker describing the night Bluegrass Music took the stage at the Ryman for the first time in 1945. 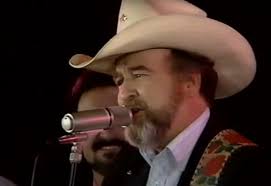 Johnny Bush was a country music singer, songwriter, and drummer. Bush, nicknamed the "Country Caruso", is best known for his distinctive voice and as the writer of "Whiskey River", a top-10 hit for himself and Willie Nelson's signature song. He was still popular in his native Texas. He was 85