For the second consecutive year, the ACADEMY OF COUNTRY MUSIC (ACM) AWARDS will broadcast from NASHVILLE rather than their longtime LAS VEGAS home. As they did in 2020, the awards presentations and performances will originate from three iconic MUSIC CITY venues, the GRAND OLE OPRY HOUSE, the BLUEBIRD CAFE and the RYMAN AUDITORIUM. The 56th annual show is set for SUNDAY, APRIL 18th from 7-10p (CT) on the CBS TELEVISION NETWORK, and will also stream live on PARAMOUNT+.

In related news, the ACADEMY’s charitable arm, ACM LIFTING LIVES, will donate $25,000 to the MUSIC CITY, INC. foundation for its CHRISTMAS DAY Explosion RELIEF FUND, with the donation earmarked for local musicians out of work due to damage to venues caused by the DECEMBER 25th, 2020 bombing.

“We’re thrilled to return to MUSIC CITY’s most iconic venues as we come together on APRIL 18th to celebrate the best in Country music, back in our normal awards cycle,” said ACM CEO DAMON WHITESIDE, referencing the fact that last’s years show was pushed from its traditional spring date to SEPTEMBER due to the pandemic. “A huge thank you to the city of NASHVILLE, GRAND OLE OPRY HOUSE, RYMAN AUDITORIUM and BLUEBIRD CAFE for welcoming us back to NASHVILLE, where we can look out for the safety of our artists while shining a spotlight on this vibrant city after a tough 2020.” 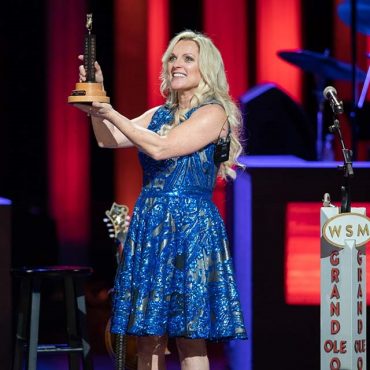 Watch the moment HERE   NASHVILLE, Tenn. – Multi-award-winning bluegrass artist Rhonda Vincent was formally inducted as a member of the Grand Ole Opry Saturday by Opry member Dierks Bentley. The invitation was delivered in February of 2020 by Opry member Jeannie Seely with an original induction date scheduled for March 24, 2020, prior to the pandemic. Dierks said, “I’ll never forget the night that our mutual friend Marty Stuart […]